The following information describes the range of wood splices used in our cues, from our standard cues right up to our Elite range. Rest assured none of the woods used in our cues are fake or artificially coloured. Each wood used is its natural colour, even the Purpleheart and Bloodwood. We 100% money back guarantee this!! 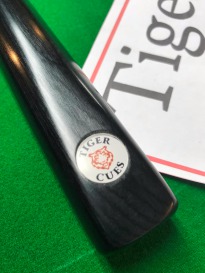 The Black Ebony used in our standard cues is the real deal, rest assured when buying a Tiger Cue you are getting a genuine black ebony hand spliced cue made by craftsman that finish the cue to bring out its real beauty using our trade mark 'Natural Wood - Silk Polish' finish. WE DONT USE LACQUER!

The cue photo to the right shows the grain that can be seen in our black ebony spliced cues. What you are looking for is the odd orange spec or strip in the ebony showing its the genuine article and not something that is painted or coloured. 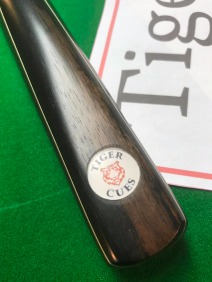 The Brown Macassar Ebony used in our ELITE Cue range is the absolute pinacle in ebony available for cue making.

Macassar ebony has varying streaks of dark and mid brown colouring, the lighter brown streak display swirls of character through the ebony sometimes not dissimilar to clouds in the wood.

The cue photo to the left shows contrasting brown grains in the Macassar ebony. 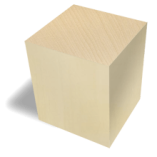 Amerian Holly is a domestic wood that is excellent turning, carving, and inlay. Very rare due to the slow rate of growth and small size of the trees that are harvested. Must be cut in winter to avoid blue-stain or graying of the wood. Holly ranges in color from white to ivory. Holly has a very close irregular grain with little or no dicernable figure. 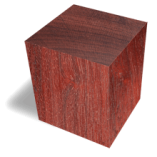 Bloodwood is an exotic wood that is sometimes referred to as cardinal wood, for its obvious beautiful deep rose color. With age it's color does darken, but not significantly so it is a great wood to use in intarsia projects. The wood is very dense, with a tight fine, mostly linear grain. 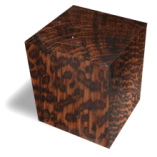 Snakewood is an exotic wood known technically as piratinera guianensis, snakewood comes from a small, relatively rare tree found in the forests of Central and South America. Initially deep red in color, snakewood changes its stripes (so to speak) upon being exposed to air, which makes the wood eventually turn reddish brown. An extremely dense hardwood, snakewood can be somewhat challenging to work with. It splits fairly easily and tends to be splintery. It's also hard to cut and drill. The bright side is that snake wood turns well and polishes beautifully. Snakewood is generally sold in small blanks and is best used in making items such as bowls, vases, knife handles, pool-cue butts, etc. 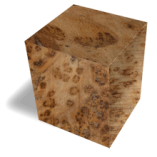 Thuya Burl is an exotic wood that the Greeks named thuya, meaning sacrifice, because they used an oil distilled from it as incense in their religious ceremonies. Some churches still use it and as sandarac oil it is valued for medicinal uses. The burls are as beautiful as they are fragrant and the Greeks and Romans vied with each other over furniture made from them. Thuya trees, along with cedars and oaks, once covered the Atlas Mountains of Algeria and Morocco, but because of over cutting, large areas have been treeless for hundreds of years. Thuya burl is fairly firm and dense with a high oil content, but tends to be brittle. Its color varies from a rich, lustrous golden brown to nearly black. The eyes, perfectly round, are scattered about in some burls like the figure in bird's-eye maple; in others they are grouped as islands. An exquisite wood, today it is used for inlays, small boxes, turnery, and precious objects. 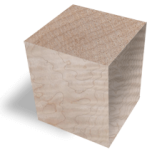 COLOR: Pale, darkening toward the heart and with distinct red-brown latewood lines

Curly Maple (Tiger Maple) is traditional hard maple (sugar maple, rock maple, hard rock maple) with a soft and flowing figure. The hard maple is the state tree of Wisconsin, Vermont, New York and West Virginia. In the North, during the cold nights and warm days of late winter, the sugar maple is tapped for its sucrose-containing sap, the source of maple syrup. Until the turn of the century, the heels of women's shoes were made from maple. Curly Maple (Tiger Maple) has been a favorite of American furniture makers since early Colonial days. 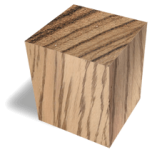 Figured Zebrawood is an exotic wood native to the Western African countries of Cameroon and Gabon. It is a hard wood, with a medium to coarse texture. The Zebra-like appearance is due to the light colored sapwood in contrast with the dark colored grain. Zebrawood is excellent for wood turning, veneer, furniture, pens, and knife handles. It works and finishes fairly, and has good gluing properties. 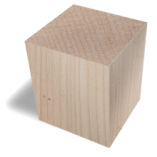 The hard maple is the state tree of Wisconsin, Vermont, New York and West Virginia. In the North, during the cold nights and warm days of late winter, the sugar maple is tapped for its sucrose-containing sap, the source of maple syrup. Until the turn of the century, the heels of women's shoes were made from maple. Maple has been a favorite of American furniture makers since early Colonial days.